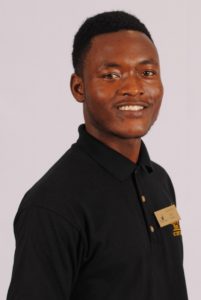 Comlan Blaise Kinto, a Black Hawk College student from East Moline, is one of 207 Phi Theta Kappa honor society members named a 2020 Coca-Cola Leaders of Promise Scholar. He will receive a $1,000 scholarship.

Kinto moved to the United States from the West African nation of Togo in October 2016. While he spoke two languages – French and Ewe – he was not fluent in English. In January 2017, he enrolled in Adult Education English as a Second Language (ESL) classes at the college’s Outreach Center in East Moline.

In just one year, he advanced seven levels in the Adult Education ESL program and moved into the Academic ESL program at the Quad-Cities Campus in January 2018. During the Spring 2019 semester, he took his last two Academic ESL classes while simultaneously taking college-credit courses in computer information technology.

Kinto became involved in several campus clubs and student organizations, volunteering his time on and off campus. In Fall 2019, he was inducted into Phi Theta Kappa honor society and for 2020, he is the vice president of fellowship for the Quad-Cities Campus chapter.

Phi Theta Kappa is the official honor society for two-year colleges. The 102-year-old organization recognizes the academic achievement of college students and provides opportunities for its members to grow as scholars and leaders.