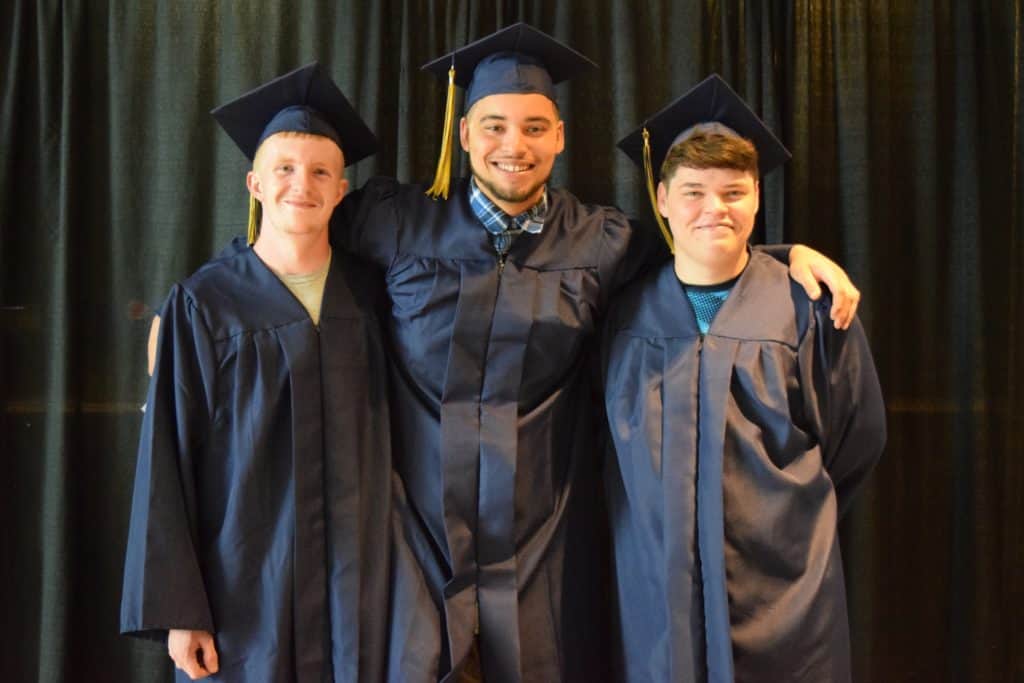 The event recognized Adult Education and Optional Education students from across the college district who completed all GED or high school completion graduation requirements during the 2017-18 school year. This is the largest graduating class in the last four years.

In January, Trenten Bailey walked into the BHC Adult Learning Center in Rock Island to enroll into Black Hawk College’s youth GED program. His goal was to graduate and begin a career in construction, both of which he accomplished.

“We all had goals that we wanted to reach and standing here today I couldn’t be more proud,” Bailey said while presenting his graduation speech.

Bailey took time to acknowledge everyone who encouraged him during his schooling, pointing out that he didn’t know where he would be without their love and support. He concluded by stating, “Today marks a new beginning for all of us as we go further in our lives and reach new goals.”

Marcus Branch, who began the adult GED program in October 2017, recalled his journey through the program.

“Motivation comes in many forms,” Branch said. For him, his family served as his form of encouragement and motivation.  “I was determined to see my dreams become reality and determine to make my family proud.”

Despite experiencing challenging life circumstances, Branch knew that obtaining a GED would provide him with new opportunities. He proudly shared with the audience that he was “proof that a person’s circumstances do not always dictate their future.”

Branch is excited to move on to the next chapter in his life. “Every choice I make now is a seed for the future,” he said.

Kordell Lathrop earned his GED diploma in just 56 days through Black Hawk College. He recalled the challenges he experienced with traditional schooling growing up and also the happiness he found after he enrolled into Black Hawk College’s youth GED program in August 2017.

“It seemed like traditional schools expected you to be like the students sitting next to you, learning all of the same things at the same pace,” Lathrop said. But for him, that was not the case.

An accidental fall off of a 13-foot high dive at the age of nine left Lathrop with seven fractures in his head, greatly affecting his learning abilities. Despite his efforts to keep up in class, he always found himself falling behind.

It wasn’t until Lathrop enrolled at Black Hawk College that he finally felt as if he were in an environment where he could learn. Classes were tailored to fit his learning needs, and he found a new support system among his teacher and peers.

He credits Ruth Hakes, his youth GED instructor, as being a big part of his success in the program. “Thank you Ruth, for having more faith in me than I had in myself,” Lathrop said during his speech.

GED and high school completion classes at Black Hawk College are offered at no cost to students and are conducted in a variety of locations. New sessions will begin in August.