Coach Logan Frye is in his second year as head coach for women’s basketball.

Before arriving at Black Hawk College, he was an assistant coach for Sherrard High School from 2014-18. He also served as the head freshman coach and coached multiple youth program teams throughout his time with the program. Frye also serves as an assistant to the director of the Black Hawk Youth Basketball League.

Frye is a 2010 graduate of Sherrard High School, where he was a three-sport athlete and four-year varsity letter winner. He continued his athletic career playing baseball for two years for Arnie Chavera at Black Hawk College. Frye then earned a bachelor’s degree in business administration from the University of Illinois Springfield, where he also played baseball and was an All-Conference selection as a utility player his senior year.

Coach Carly Frye is in her second year as an assistant coach for women’s basketball. She is responsible for skill development and recruiting, among with other duties.

Prior to joining Black Hawk College, she coached at Sherrard High School for two seasons and played an active role in coaching multiple youth program teams. She also spent one year as the head coach for local travel team, QC Ballers.

Frye is a 2011 graduate of Huntley High School. She played three seasons at NCAA Division II University of Illinois Springfield and one year at NCAA Division III Loras College where she was an All-Conference selection as a senior. She earned a bachelor’s degree in business administration from the University of Illinois Springfield.

Coach Jen is in her first year as an assistant coach for women’s basketball. She is responsible for stats, strength and conditioning, and community services, along with other duties.

VanWatermeulen is a 2013 graduate at United Township High School, where she was a two sport athlete. She holds a career record for number of steals.

She continued her athletic career at NCAA Division III Augustana College playing basketball for four years. She was a two- time defensive player of the year. VanWatermeulen earned a Bachelor’s degree in Business Marketing and Sociology. She also earned a Master’s degree in School Counseling at Loras College. 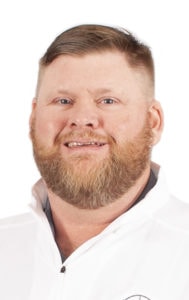 This is Brian Coleman’s second year as an assistant basketball coach for BHC. Brian earned an associate’s degree in journalism from Black Hawk College in 1995. Prior to joining the staff at BHC, Brian coached at Alleman Catholic High School for two seasons and coached junior high girls’ basketball. He has also coached for multiple AAU organizations. Brian is married to Heather and they have three daughters, Lily, a junior at Coe College, Samantha, a junior at Alleman Catholic and Madeline, an eighth grader at Jordan. In his free time, Brian enjoys golf, music, traveling for work and going to the gym to shoot with his girls.