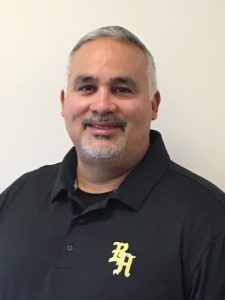 Coach Chavera is in his 16th year as head baseball coach of the Braves. In 2018, he was inducted into the NJCAA Region IV Hall of Fame.

A native of Texas, he graduated from Arlington Sam Houston High School in 1991 and played two years at Navarro Junior College in Corsicana, TX. During that time, he was coached by Skip Johnson, currently the head coach for the University of Oklahoma. During the summer of 1994, Coach Chavera played for the Elkart Dusters of the collegiate wood-bat Jayhawk League. The team won the Jayhawk League championship and finished third at the NBC World Series. While in the Jayhawk League, he played for Greg Evans, current associate head coach at Abilene Christian University. After playing one year at Dallas Baptist University under legendary coach Jim Harp, Coach Chavera signed with the Houston Astros baseball organization and played five years of minor-league baseball as a catcher. Three of those seasons were under the tutelage of Manny Acta, former MLB manager of the Cleveland Indians and Washington Nationals and current bench coach for the Seattle Mariners. As a professional, he has a lifetime batting average of .286 highlighted by 61 homeruns and 77 doubles. In 2000, he earned a mid-season and post-season All-Star selection.

The Braves baseball teams have qualified for the NJCAA Regional Tournament for the last nine consecutive years. The 2019 team won three elimination games in the post season to finish as Region IV runner-up, being one team shy from playing in the NJCAA DII World Series.

Coach Chavera has placed more than 130 sophomores at NCAA DI, DII, DIII and NAIA schools as well as Major League Baseball to continue their playing careers. While stressing academics, he has coached 136 Academic All-Conference and 24 NJCAA Academic All-American award recipients. In 2015, the Braves baseball team earned a NJCAA Academic Team of the Year Award with a 3.26 cumulative team GPA.

Coach Chavera has a bachelor’s degree in human performance and fitness and received his C.S.C.S. from the National Strength & Conditioning Association in 2004. That summer, he served as a strength coach for the Minnesota Twins Baseball Club. In July 2019 he became Black Hawk College’s interim athletic director. He also serves as the Arrowhead Athletic Conference baseball chairperson and the NJCAA Region IV baseball chairperson, overseeing Divisions I, II and III. 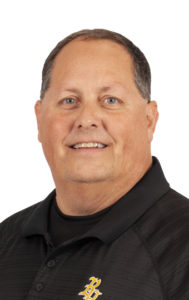 Dan O’Keeffe joined the BHC staff in March 2018 as an assistant coach, participating in all aspects of coaching, recruiting and baseball operations.

A native of Moline, IL, he graduated from Alleman High School in Rock Island, IL. He was a multi-sport athlete with a passion for baseball. While at Alleman, he received many accolades including Most Valuable Player of the baseball team.

O’Keeffe elected to focus on academics and graduated in four years from Eastern Illinois University with bachelor’s degrees in finance and marketing. After working five years for an investment bank, he earned his MBA from DePaul University in Chicago. He moved his family back to the Quad Cities in 1998 to work for his current employer, John Deere.

Coach O’Keeffe has more than 20 years of experience coaching and volunteering for various youth sports programs and teams. He demonstrates positive coaching techniques and has a strong desire to help players develop and improve their talents both on and off the field.

A native of Rock Island, IL, Wethington graduated from Alleman High School. While at Alleman, Wethington twice was voted to the Western Big 6 All-Conference Team. He also earned All-Area honors in all three seasons of high school. In 2007, he was named to the Puma All-American Team and Most Valuable Player of the Illinois State Tournament.

After high school, Wethington began his collegiate career at Black Hawk College playing for Coach Arnie Chavera. In 2008 as a freshman, he led the Braves baseball team in every single offensive category while earning Arrowhead All-Conference and NJCAA All-Region honors. During Wethington’s sophomore year, he helped the Braves to a 32-14 record while leading the team in hitting (.405). In 2009, he again was voted to the Arrowhead All-Conference Team and NJCAA All-Region Team. He also was named an NJCAA DII Pre-Season All-American in 2008.

After two standout years at Black Hawk College, Wethington continued his playing career at the University of South Carolina at Aiken.

After college, he transitioned to playing slow pitch softball at the national level, where he has been named to the B All-American Team on three separate occasions. Wethington also is a two-time selection to the C All-American Team and earned a spot on the C All-World Team.

Coach Wethington has been heavily involved in the private hitting instruction circuit over last 10 years while continuing to give back to the youth in the Quad-Cities area.