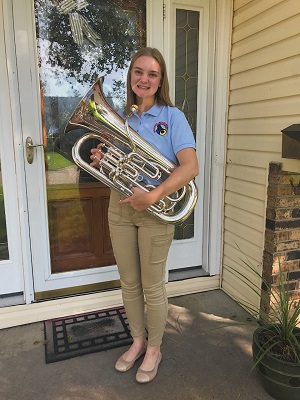 Black Hawk College music student Megan Holevoet had a unique performance opportunity this semester — she got to play an online duet with a member of the United States Air Force Band.

A 2019 Geneseo High School graduate, she is pursuing an Associate in Arts degree at the Quad-Cities Campus. After graduating from Black Hawk College, she plans to transfer to a four-year university to earn a bachelor’s degree in music education.

“I would love to be a band director or teach at a university! My dream is to play in a band through the military!” she says.

Listen to her duet with Technical Sgt. Erik Lundquist from Jamestown, N.Y.

How did you find out about this opportunity?

Since many musical events are being canceled/postponed around the world, The United States Air Force Band made a post on Facebook announcing they were going to host a “duet initiative.” The instructions were to record a bio about yourself and one part of a duet. You had to be 5-21 years old. They said they would try to make as many videos as they could.

I was interested because I want to play in a band through The United States Air Force someday! I also wanted to do it because if I was chosen, it would give me the confidence I need to keep pursuing this!

This was a no-brainer for me! Anything I could do to make connections and play with The United States Air Force Band, I’ll do it!

How did you prepare?

This worked out really well for me, actually. I had a duet prepared to play with another student to play at a concert in April, but it got canceled. I loved the duet and didn’t want it to go to waste. So, this was the perfect way for me to still be able to perform it!