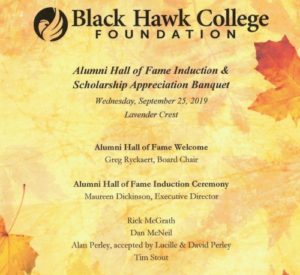 Four outstanding Black Hawk College Quad-Cities Campus alumni were inducted into the 2019 Alumni Hall of Fame at a Sept. 25 ceremony.

“These alumni all took diverse career paths yet each achieved exceptional accomplishments in their respective industries. We proudly welcome them to the Alumni Hall of Fame!” said Maureen Dickinson, executive director of the Black Hawk College QC Foundation.

Member of BHC cross country and track teams. Cross country team made it to NJCAA championship in 1975. Has run more than 50 marathons and all 21 Quad Cities Marathons. Helped with many races in the Quad Cities. Assistant race director for Bix 7.

Worked for KJWW Engineering Consultants (now IMEG) for 40 years, retiring in 2017. Came out of retirement to work for ICC, Inc., another engineering consulting company. Contracted to the 3M facility in Cordova for 35 years in project manager/construction management position. Engineer of the Year Award from 3M, an award specifically for 3M employees. For a contractor to receive this award, it says a lot about how 3M values Rick.

Program manager, fundraiser and executive director in the nonprofit sector for 14 years. Executive director of the Spring Forward Learning Center in Rock Island last four years. Increased SFLC budget from $150,000 to $618,000 and increased staff from two to five. SFLC serves more than 600 children in after-school and summer enrichment camps. More than 90% of campers maintained or gained in reading level. Created partnership with the Rock Island Futbol Club that engaged 45 young athletes to learn the important lessons of teamwork, dedication and sportsmanship.