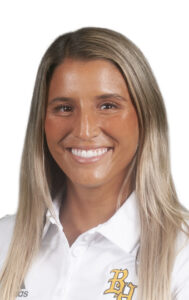 Tarah Rayos returned to the Quad Cities in July 2021 to become the Braves’ head softball coach.

She played her sophomore year at Waubonsee (IL) Community College, earning ISCC 1st Team All-Conference, Conference Pitcher of the Year and 1st Team NJCAA Region IV All-Region honors and finishing with a 20-win season on the mound for the Chiefs. During the 2014 postseason, she also was named to the NJCAA Region IV Division II District B All-Tournament Team.

After competing at the junior college level, Rayos transferred to St. Ambrose University (NAIA) where she was a starting pitcher and second baseman for the Fighting Bees during the 2015 and 2016 seasons. While at SAU, she earned Academic All-Conference honors and a bachelor’s degree in marketing.

She continued with the SAU softball program as a graduate assistant coach during the 2017 and 2018 seasons under head coach Ron Ferrill. With Rayos as their pitching coach, SAU pitchers held the lowest earned run average (ERA) in the conference for two years.

Rayos completed her master’s degree in business administration at SAU in 2018 then rejoined Perry Clark, her former head coach at Waubonsee Community College, at Mount Mary University (NCAA) in Milwaukee, WI. She served as an assistant coach for Clark for the 2020 and 2021 seasons.

She has worked with numerous travel softball programs in the Chicagoland area, Milwaukee region and within the Quad Cities. During Rayos’ coaching career, she has run numerous camps/clinics and given private lessons to youth softball players of all levels.

After playing and coaching in the area, Rayos is very familiar with Quad Cities and considers the QCA her second home. She is very excited to take over the Braves softball program and be a part of the Black Hawk College family! 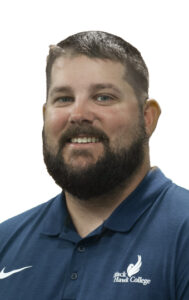