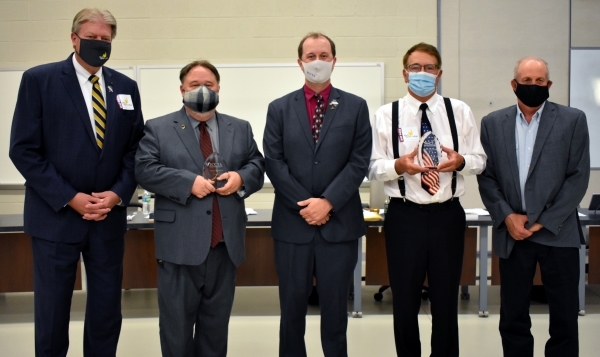 Calmer has more than a dozen patents for harvesting technologies that have revolutionized how corn is grown and managed around the world. He has been named one of agriculture’s 25 most influential people, voted one of the 40 No-Till legends nationwide and received the Public Image of Agriculture Award.

“In the early days, it was tough, and today, I’m living a fairy tale. I am so honored,” Calmer said.

Read more about Calmer and his accomplishments at www.bhc.edu/marioncalmer.

Past Black Hawk College winners of the Distinguished Alumnus Award are William Albracht, retired agent with the U.S. Secret Service (2018), and Chad Pregracke, founder and president of Living Land Waters (2007).

Black served on the Black Hawk College Board of Trustees from 2003-09 and 2013-19. He served as chair of ICCTA’s West Central Region and as ICCTA secretary, where he initiated the association’s rebranding and the development of a new association logo.

Board of Trustees retreat