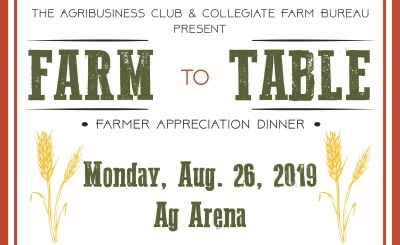 You’re invited to a Farm to Table Farmer Appreciation Dinner presented by the Agribusiness Club and Collegiate Farm Bureau in the Ag Arena.

Guest speaker at 6:30 p.m. — Michelle Miller aka The Farm Babe 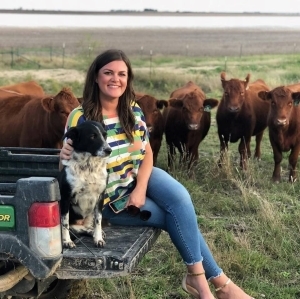 Michelle was once a big city girl who moved to a farm in rural Iowa for love. Once there, she realized everything she thought she knew about agriculture was wrong, and now works to debunk the myths she once believed in.

In the nearly five years she’s been blogging, she’s built a name for herself as a dedicated myth buster in the food industry and has been featured in Forbes as one of the most followed and reputable voices for agriculture on social media today.

With more than 105,000 followers, she shares her passion for agriculture everywhere she goes and loves giving a bigger voice to science in the food space … by connecting consumers to modern farmers, scientists, veterinarians, etc. She’s a farmer, an international keynote speaker, a weekly columnist with www.AGDAILY.com, and has proudly spoken alongside some of the biggest names in food and farming today.