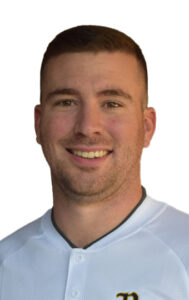 Logan Frye has reinvigorated the Black Hawk College women’s basketball program, putting the Braves back on the map and building a title contender during just three seasons in Moline.

Frye was hired in April 2018 as the women’s head basketball coach. Frye led his team to a 20-win turnaround in only his second season as the Braves head coach. The Braves finished 2-22 (0-8) in 2018-19 followed by 22-11 (7-1) in 2019-20 and claimed the program’s first outright Arrowhead Conference Championship since 2002. The Braves would advance to the Region IV Championship game and fall six points shy of reaching the National Tournament, which was cancelled due to COVID-19. The 2019-20 campaign was the first winning season for Black Hawk since 2010-11. The Braves 22 wins in a season ranks third in program history and 2,448 points scored ranks second all time.

Frye’s third Braves team, in a 2021 cancelled COVID-19 season, put together a four-game Alternative Season and won all four games by an average of 15 points. All but two players from the 2020-21 alternative season will return to the roster for 2021-22. Frye and his staff have also made waves on the recruiting trail during their time in Moline. In his first year of recruiting, he brought in Megan Teal and Jessica Stice two IBCA all-state players. In his second season of recruiting he landed the WB6 leader in points and rebounds Jasmine Bell, Western Illinois Player of the Year Sidney Garrett, IBCA All-Stater Lexi Nichols and Western Illinois All-Area selection Carley Whitsell. The current recruiting class includes IBCA All-State players Corrina Noble and Khloe Damm along with former UNI commit Alicia Garcia, Western Illinois All-Area Selections Liz Fish, Kara Schipper, and Kelci Shelton, Mississippi Athletic All- Conference selection Me’kiyah Harris and Tri-State (IA, IL, MO) All-Area selection Jayden Schuette.

In his tenure at Black Hawk College, Frye’s teams have lead the Athletics Department in team GPA all three years, improving the total team GPA in each season. His teams have been named to the NJCAA All-Academic Team in every season and recently his 2020-21 team finished 15th nationally, 2nd in Illinois, and 1st in Region IV for team GPA. He has produced 23 Arrowhead Academic All-Conference selections and nine NJCAA All-Academic Athletes. Frye takes pride in being active in the community with his teams accumulating more than 100 community service hours in each season. Frye has had three players continue on to the next level to play basketball including Megan Schueneman (St. Ambrose University), Margie Villaruz (Mount Mercy University), and Sydney Hannam (Eureka College).

Frye came to Black Hawk from Sherrard High School, where he was a part of a staff that compiled 95 wins in four seasons, including three Conference Championships, three Regional Titles, one Sectional Title and an Elite 8 appearance. Sherrard has one of the most successful and prolific programs in the area. He coached 12 All-Conference players, 12 All-Area players, and three IBCA All-State Players and five athletes that continued on to college athletics.

Frye also served as the head freshman coach at Sherrard and coached multiple youth teams in his four years as a part of the coaching staff. In addition to basketball, Frye has also coached baseball at Sherrard HS and Mercer County HS where he was a part of three IHSA Regional Championships and two Conference Championships. Prior to starting his coaching career, Frye graduated in 2010 from Sherrard HS, where he was a three-sport athlete and four-year varsity letter winner.

Frye continued his baseball playing career at Black Hawk College under current BHC Athletics Director and former baseball coach Arnie Chavera. Frye was an outfielder for BHC teams that compiled an 88-20 record, two Arrowhead Conference Crowns, two Sectional Championships and a program record 45 wins in a season. Frye then transferred to the University of Illinois-Springfield where he earned his bachelor’s degree in business administration and continued his baseball career as an All-Conference Selection and a key member in the program’s first ever postseason berth.

Frye also served as a member of the Student Athlete Advisory Committee and an Athletics Department intern at UIS. Frye works professionally as a Contract Specialist for Army Contracting Command at the Rock Island Arsenal. Frye’s wife, Carly, served as an assistant basketball coach under him for the 2018-19 season. 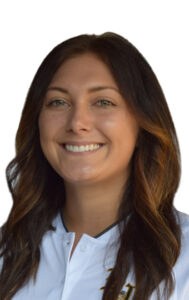 Coach Jen joined the Braves as an assistant women’s basketball coach in Fall 2019. She is responsible for stats, strength and conditioning, and community services, among other duties.

VanWatermeulen is a 2013 graduate of United Township High School, where she was a two-sport athlete. She holds a career record for number of steals.

She continued her athletic career at NCAA Division III Augustana College playing basketball for four years. She was a two-time defensive player of the year. VanWatermeulen earned a bachelor’s degree in business marketing and sociology. She also earned a master’s degree in school counseling at Loras College.