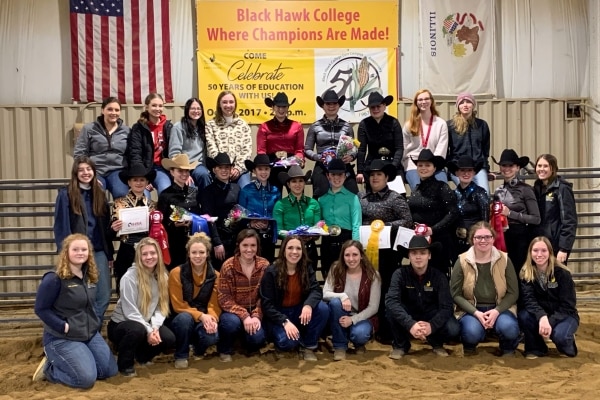 The team recently won the Regional Championship for the 18th consecutive competition season and will advance to the Semifinals in the team competition. Also, eight BHC riders will compete individually in the Semifinals.

“I am so proud of this talented group of horse people,” said Bekah Irish, coach and assistant professor of equestrian science.

“They work hard every day. A lot has happened in the last two years, and I am grateful for the chance to get to know each member of this team,” she said.

Black Hawk College hosted 12 schools from five states and facilitated more than 330 rides Feb. 26-27 at the East Campus. Over the two days, the team organized and competed in three regular-season shows and the first post-season event, the Regional Championship.

Thirteen BHC riders qualified for Regionals. Normally it takes riders two seasons to earn enough points to be eligible, but because there was not a competition season in 2020-21, BHC sophomores had just one season to qualify. Black Hawk College is the only two-year school in its region.

The 13 individual Regional qualifiers were:

Only the top two riders in each of the seven divisions advance to the Semifinals. The individual Semifinals qualifiers are:

The Semifinals team will consist of:

From March 18-20, Black Hawk College will host one of three IHSA Western Semifinal Championships. The other two will be at West Virginia University and Texas Tech University. It will be the third time BHC has hosted this large event.

“We are excited to welcome teams and riders from across the country, from New York to California,” Irish said.