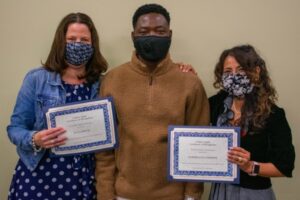 During the honor society’s Fall 2021 Induction Ceremony, the Golden Apple Award was presented to:

Both were nominated by PTK chapter president Blaise Kinto.

Cooper “inspired him to believe that everything is possible,” Kinto wrote in his nomination. He mentioned that “during his work with her in the Mentor-Mentee Program, she would have one-on-one meetings with every helper on the team, so she got to know what is going on in their lives both school-wise and home-wise.”

Koch “has been a positive powerhouse” for him and many other students, Kinto wrote in his nomination. He mentioned that she is “one of the most genuine, kindest and greatest people with so much warmth and welcoming.”

The chapter thanks the Phi Theta Kappa students who took the time to nominate faculty and staff members.

Each fall and spring semester, PTK students at the Quad-Cities Campus are asked to recommend a well-deserving faculty or staff member for the award. The first Golden Apple Award was presented at the chapter’s Spring 2019 induction ceremony.