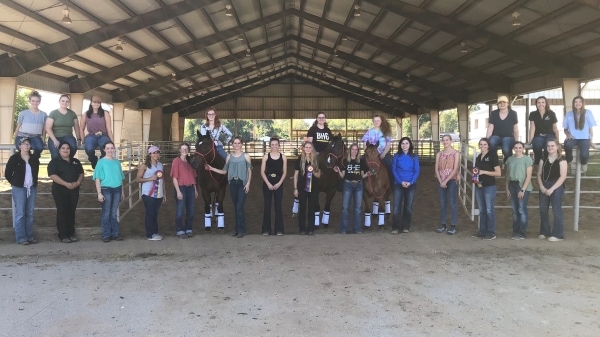 This fall, the Black Hawk College Intercollegiate Horse Shows Association (IHSA) Western Equestrian Team returned to the arena to compete and spent most of the time in the winner’s circle.

“Coming off of a year with no competition or travel, this young team has risen to the occasion and carried on the legacy of excellence within the equestrian program and our competitive teams,” said Bekah Irish, coach and equestrian science instructor.

“I am inspired daily by their perseverance and resilience both in the arena as fierce competitors and on the sidelines as humble teammates,” she said.

Riders compete in divisions ranging from beginners to nationally recognized competitors. They experience the ultimate catch ride, drawing for a horse only minutes before entering the show pen.

In the spring, students will compete in three regular-season meets before moving into the postseason. Black Hawk College East Campus will host the Regional Championships and Semi-Finals then Nationals will be in Harrisburg, PA, in May.

The BHC team’s Fall 2021 competitions were:

Please note – During the regular season, students compete in multiple rounds in each division so there can be more than one student placing 1st, 2nd, etc.