The future is full of possibilities for Black Hawk College graduate Ty Lewis. 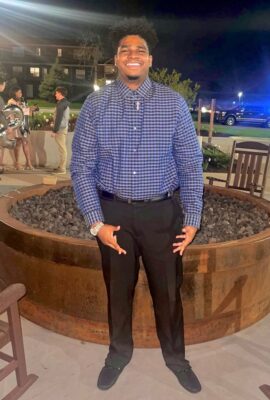 He isn’t sure what he’ll be doing when he completes his bachelor’s degree in 2022, but one thing is certain: he’s determined to make an impact.

“A lot of people invested in me,” Lewis said. “I want to be able to help people and make a difference.”

He graduated from Black Hawk in 2020 with his Associate in Arts and transferred to St. Ambrose University after receiving a unique scholarship opportunity.

Lewis, who is majoring in finance, is the first recipient of an SAU scholarship that is coupled with an internship at Quad City Bank & Trust.

“We could not be more fortunate to have someone of Ty’s caliber working here,” Anderson said.

The 2018 Rock Island High School graduate moved to Rock Island from Georgia in 2013 and quickly made the Quad-Cities his home.

When it came time to pick a college, Lewis knew Black Hawk was a great choice because of the money he would save and because he could stay close to his dad.

He also knew it was a great choice to complete his general education courses where he would have quality instructors and small class sizes.

Plus, there were many opportunities to get involved.

“It’s what you make of it, and I made the most of my opportunity,” Lewis said.

He was active in the Student Government Association and Phi Theta Kappa, the honor society for community colleges.

Lewis enjoyed his SGA experiences, including getting to know the advisors and becoming close friends with other SGA students. 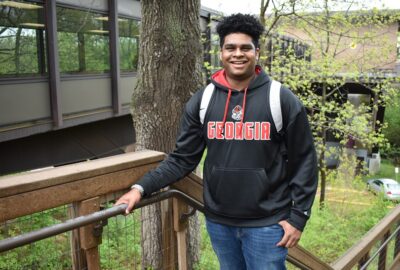 “People I still talk to now, and will be talking to for the rest of my life,” he said.

As a PTK member, Lewis received another SAU scholarship.

Between being a Presidential Scholar and his other scholarships, Lewis will graduate without college debt.

As a Black Hawk College student, Lewis enjoyed his speech class with Michelle Johnson and English classes with Torria Norman.

“They changed my life,” he said of his favorite instructors. “(They) bettered me as a student, young adult, young man.”

He noted Johnson does a great job giving feedback and helping students become better speakers, and he will always remember the meaningful discussions in Norman’s classes.

To prepare to transfer to SAU, he worked closely with his advisor, who helped him make class selections.

Lewis said the transfer process went smoothly, and he was ready to tackle SAU classes his junior year.

“I was definitely prepared,” he said.

Lewis almost took a different path when his father passed away last summer. He considered taking a break from school, but changed his mind. 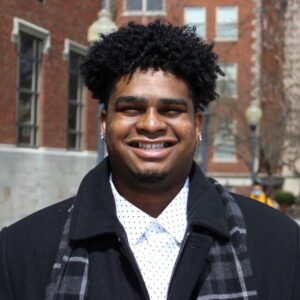 Lewis decided he had to keep going.

Now, he is just a year away from having his bachelor’s degree and grateful he didn’t pause his studies.

During SAU’s academic year, he works part-time at Quad City Bank & Trust for his internship as a credit analyst.

This summer, he is working full-time at his internship and learning about other areas of the bank.

He hopes to work at Quad City Bank & Trust after graduating, but no matter what, he wants to find a way to give back to the community.

Soon, Lewis will help select the next recipient of the scholarship he received. Long-term, he hopes to give back in other ways, including by teaching financial literacy as a volunteer.