Caden Wright’s message to prospective students is to give Black Hawk College a shot.

“It’s the best of both worlds,” the BHC student said. “Junior college is almost a must.” 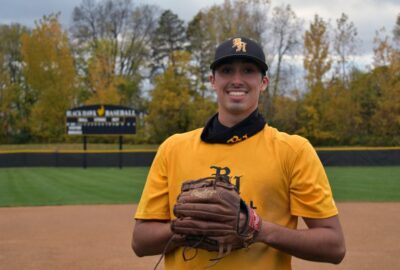 While there, he realized he wanted to play college baseball, so he decided to switch to Black Hawk College where he had the opportunity to do just that.

Although he ended up at Black Hawk because of athletics, Wright noted that there are many academic reasons to attend a community college.

“You get your feet wet before going to a four-year,” he said. And at Black Hawk, you get to discover your way of learning, have access to one-on-one attention and can find help if you need it.

So far, Wright’s favorite college moment was being in the playoffs his first year at Black Hawk College.

“That might be my favorite moment in my life,” he said.

Wright pitches and plays first base in the outfield for the Braves. He said the team is family, and he loves the teamwork the game requires.

“I love the fact that it’s not just one guy,” Wright said. “It takes everybody.”

“His work ethic and commitment to our program makes us better,” Keim said. “The drive he shows to get better each day is what we look for in players.” 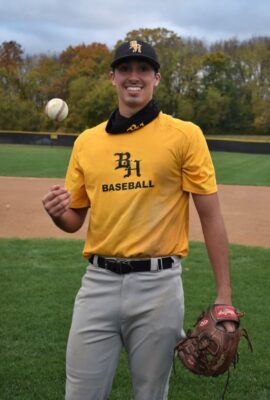 In addition to being committed to the game, Keim said Wright works in the classroom just like he does on the field.

This year, Wright joined the Student Government Association (SGA) as a senator and the first liaison between SGA and athletics. He likes how SGA helps students and encourages involvement.

Wright’s courses this semester include two business classes and his favorite instructor is Ewelina Bergert, assistant professor of business.

“She’s just such a nice person and she’s always willing to help out, and she really knows what she is talking about,” he said.

Wright plans to graduate with his Associate in Arts in May and transfer to a four-year school where he will continue playing baseball.

Where he will go is still up in the air, but he is hoping to study outside of the Midwest. He plans to earn a bachelor’s degree in marketing and finance.

After college, he wants to work for a community-minded corporation that makes a difference and to work in real estate. His ultimate career goal is to start his own company.

No matter where he ends up, Wright will take his memories of Black Hawk College with him.

“I really do love this place.”