Black Hawk College golfers are heading to the Region IV Tournament having won two of their six tournaments and coming in 3rd in three tournaments in the shortened fall season.

It’s been hectic for the Braves, who played in four tournaments in 12 days. But now they have their sights on the Region IV Tournament Oct. 8-10.

“The regional championship is what this team is focused on,” said Butch Haverland, head golf coach. “We’re doing well but we must step up.”

Two teams from Region IV will advance to the national championship next May in Indiana.

“With the loss of the national championship this past spring, this team is determined to make it to nationals again,” Haverland said.

“If we play steady and keep our chins high, we should do well,” he said. “But with the game of golf, you never know what will happen.” 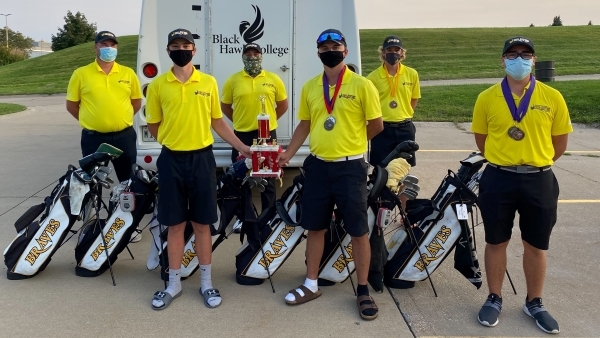 The Braves opened the season by winning the Skyhawk Classic by 31 strokes, beating out seven other schools with a score of 623. Gabe Beardsley, Ethan Earl and Peyton Perez led the Braves through the 36-hole, two-day event. All three finished in the Top 10 with Beardsley only one shot shy of 1st at 152. Earl came in 4th at 154 and Perez took 6th with 156.

Fourteen teams from two- and four-year schools competed at the Duane Chanay Black Hawk Invitational at TPC at Deere Run. As a team, the Braves took 6th with Perez in a four-way tie for 13th out of 81 golfers. He ended the day at five above with 76 strokes.

The Braves took 3rd out of 11 schools with a team total of 610 for the two-day tournament. After the first day, Peyton Perez and Ethan Earl were in a three-way tie for 1st with a score of 71. Perez ended the tournament tied for 4th with a score of 147, only one shot behind the three golfers who tied for 1st. Gabe Beardsley won the second day of competition with 70 and ultimately tied for 6th at 148. Earl tied for 10th with a score of 151. 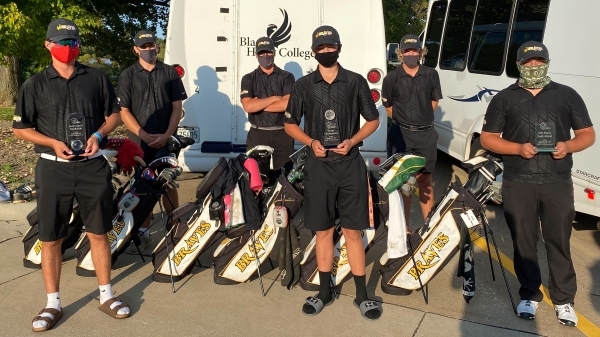 “The weather was awesome and the course was great at Park Hills,” Coach Haverland said. The team came through with a one-shot advantage for the win, besting eight other teams with a combined score of 312. As individuals, Gabe Beardsley won with a 76 for the day, and Gannon Haskins shot 78 for sixth place.

The Braves came in 3rd in a field of five strong teams. “We were playing well the first day, but fell back the second,” Haverland said. Ethan Earl led after the first day with 71 and tied for 4th with 152. Gabe Beardsley and Peyton Perez each ended with 158, tying with each other for 12th out of 37 golfers.

At the Region IV preview, “the team was running on empty and we did not finish the tournament strong,” Haverland said. The Braves came in 3rd of 12 teams with a score of 320, just six strokes from the tournament winner. “We did gain some valuable experience, and we should be ready for this Thursday and Friday when we’re back there for the regional championship.”