After graduating from Rockridge High School, she postponed college for a year to work in hopes she would figure out what she wanted to do. 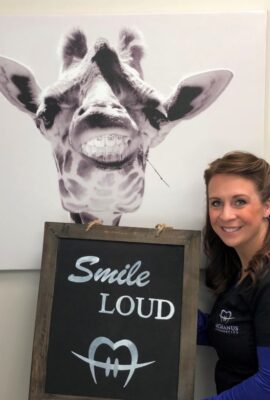 “I still had no idea, but I wanted to start school and at least get the process started,” Dr. McManus said. “I decided on Black Hawk because it was affordable and close to home.”

She didn’t regret that decision.

“I think it is a great way to start college, because it is affordable and an easy transition from high school,” Dr. McManus said. “It allowed me to dip my toe in without feeling overwhelmed by debt.”

The small class sizes and approachable instructors also helped put her at ease. She said Black Hawk allowed her to develop better study habits, especially after a break from school.

Dr. McManus graduated from Black Hawk College with an Associate in Arts in 1997 and transferred to Western Illinois University.

“All my credits transferred, and the transition was smooth,” she said.

When she graduated from WIU in 2000 with a bachelor’s degree in physical education, she didn’t realize her educational journey wasn’t over yet.

After college, Dr. McManus worked at the Rock Island County Health Department, where she had also interned. Then she and her husband moved down south for a while due to a job he accepted.

“Over the next few years I jumped through several odd jobs,” she said. “I had never considered dentistry, but was exposed to it at one of my odd jobs.”

Since she hadn’t planned on a career in dentistry, Dr. McManus returned to Black Hawk College in 2002-03 to take the prerequisites she needed to apply for dental school.

Her favorite BHC instructor is chemistry professor Brian Glaser. Chemistry wasn’t her favorite subject, but he made it easier, and he helped her prepare for the standardized entrance test for dental school.

She passed her test and soon was attending the University of Iowa College of Dentistry. In 2008, she graduated with her Doctor of Dental Surgery, or D.D.S. 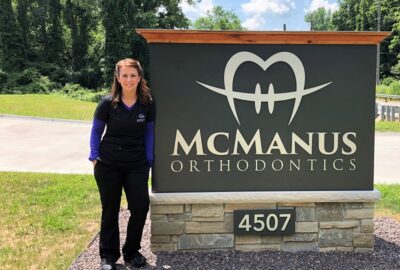 “I entered dental school with the thought that I would like to specialize in orthodontics and that did not change after being further exposed to it,” she said.

She completed a two-year orthodontic residency at the University of Iowa and graduated in 2010, adding a Master of Science and Certificate in Orthodontics to her credentials.

Dr. McManus then moved back to the Quad-Cities to begin working as an orthodontist.

In 2016, she opened her own practice, McManus Orthodontics in Rock Island. The business recently moved into a new building on 24th Street near Black Hawk Road.

While it took some detours to discover her dream career, Dr. McManus said it might have been a good thing, because she only had to think about the next step.

She has always loved variety, so it’s fun for her to get to work with all kinds of people, from school-aged kids to adults.

“I love to hear about everything going in their lives, and creating beautiful smiles is the cherry on top.”

How to @ the Hawk – Meet & Exceed Faculty Expectations – FULL