This fall he will transfer from the East Campus near Galva to Southern Illinois University in Carbondale to pursue an aviation degree.

As a junior and senior at Wethersfield High School in Kewanee, Fisher completed more than 20 credit hours in dual credit courses.

Dual credit allows in-district students to take college-level courses while they are still in high school. They receive college and high school credit for completing those courses.

Fisher highly recommends dual credit classes as a way to save money and time while working toward a degree.

“I’m actually upset with myself I didn’t take more,” he said.

Between his dual credit courses and current classes, Fisher said he will only need to study at SIU for three years instead of four.

Fisher, who is in the U.S. Army Reserve, went to boot camp after graduating from high school.

When he returned from boot camp in November 2019, he decided to take Spring 2020 classes at Black Hawk College. 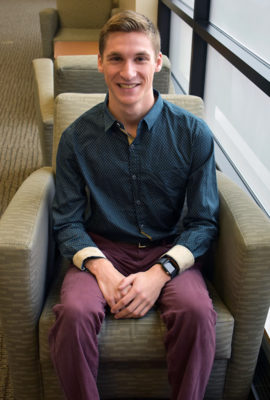 Fisher recommends studying at Black Hawk College because the small class sizes allow students to interact with their instructors.

“If you need help, you can go to the teacher and they actually know who you are,” he said.

Fisher said other perks include lots of class options, an easy-to-navigate campus and engaged instructors.

“They really are amazing teachers in general and good people,” he said. “They truly care about the students and want them to succeed.”

A future in flight

The seeds of a career in flight were planted during air shows.

In elementary school, Fisher saw a World War II bomber fly during a show and found it fascinating.

“I was just amazed about how something that weighs so much could be in the air,” he said.

As a teen a handful of years later, Fisher got behind the controls of a plane during a show and flew it with the help of a pilot.

“When you’re up in the air, it’s like everything else is gone,” he said. “There’s no experience like it.”

Now, his goal is to become a commercial airline pilot after graduating from SIU.

“I knew that’s what I wanted to do, I wanted to fly anyway possible,” he said, “so I thought I might as well make a career out of it.”

Interested in earning a bachelor’s degree? Black Hawk College can help you earn credits toward that degree and transfer to the school of your choice.