Bosnian basketball player excels on the court, in the classroom

Nearly 5,000 miles away from his hometown, Banja Luka in Bosnia, Filip Timotija has found a home away from home.

The Black Hawk College freshman student and basketball player is earning his Associate in Arts degree while living in an apartment walking distance from campus. 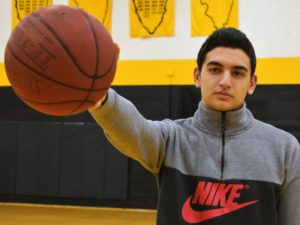 He’s gained lasting friendships, including roommates he considers family – two teammates and another student – and is fulfilling his dream of playing college basketball.

Timotija moved to the United States in 2018 to complete high school at Bella Vista College Prep in Phoenix, AZ, after studying in Italy.

He made his moves for additional opportunities, with his family’s blessing.

“They were 100% supportive which I am grateful for,” he said.

Timotija misses family, his friends back home, the food, and occasionally speaking his native language, Serbian. He learned English in elementary school and became fluent in Italian in high school.

“I had to start learning it rapidly,” he said, noting he arrived in Italy only knowing the basics.

While studying in Arizona, Timotija met a trainer who previously played basketball at Black Hawk College. The trainer connected him to BHC men’s basketball head coach Darren Bizarri, who recruited him.

“Black Hawk was definitely the best option in terms of scholarships and fit,” he said of the offers he received.

The athletic scholarships and quality of the team made Black Hawk College the best fit for Timotija. He signed on and made the move to the Midwest after graduating from high school.

His favorite moment at Black Hawk College so far is playing in his first basketball game of the season.

“At that moment I realized I reached the point where I could say I actually played college basketball,” Timotija said. It felt great to realize he reached that goal.

He takes both academics and athletics seriously, achieving spots on the honors and athletic director’s academic lists for Fall 2019.

Timotija, who is a combo guard, loves that he can study as much as he needs to and still have enough time to devote to practicing and the game.

“Black Hawk College is time management-friendly, and it is flexible,” he said. “You can achieve your goals whether you’re an athlete or a regular student.”

His favorite instructor has been history professor James Larrabee. Timotija said Larrabee’s teaching style and lectures made the material engaging and easier to comprehend.

When Timotija graduates from Black Hawk College in 2021, he will transfer to a four-year college. He plans to study journalism and hopes to continue playing basketball. 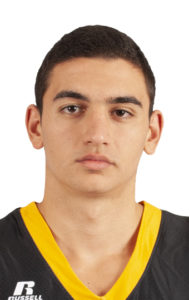 He’ll face a crossroads after graduating: return to Bosnia to play basketball professionally or pursue American citizenship and find a job here.

He is interested in working in news or sports journalism.

For any prospective college students thinking about their next step, Timotija recommends studying at Black Hawk College to get a quality and affordable education.

“They will experience great classes with phenomenal instructors,” he said.

Interim athletic director Arnie Chavera said it speaks volumes about someone when they select a path less traveled while pursuing their goals like Timotija has.

In addition to taking risks in order to grow, Timotija consistently puts in the work to do well academically and while playing. It’s not uncommon to find him in the gym practicing before or in between classes.

“He puts more shots up weekly than any other player,” Chavera said. “That drive and commitment will pay off for him someday.”