After work, the odds are good you can find Alex Richardson behind the scenes at Playcrafters Barn Theatre in Moline.

“I have a blast doing it,” he said. “To me it’s not like more work, or a chore, to leave here and go and spend hours doing that.”

The Black Hawk College graduate and employee also has acted, but he prefers to stay out of the limelight.

“I like doing the lights, the sound, the directing, the producing, the stage managing,” Richardson said. “Really anything not on stage I prefer doing.” 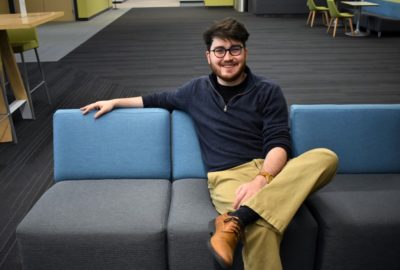 Richardson graduated from Moline High School in 2012 and started taking summer classes at the Quad-Cities Campus a few weeks later.

He decided to launch his college education at Black Hawk College, where he earned an Associate in Science degree, because it was affordable.

“You can get all your gen eds done for less than one term at a four-year,” he said. “It’s wild to me that more people don’t take advantage of that.”

Richardson acted in high school and became active at Playcrafters in 2012 while studying at Black Hawk College.

He auditioned for a role in “Moving” and didn’t initially make the cut, but ended up with the part after someone dropped out.

“Once I got my foot in the door, I tried to do as much as I could whenever I could,” Richardson said.

Now, his Playcrafters roles include box office manager, web manager, and helping with the technical aspects of shows.

After graduating from Black Hawk College, he transferred to the University of Illinois and earned a bachelor’s degree in media communications with minors in English and informatics.

His minor in informatics inspired him to pursue a master’s degree in computer information systems at Colorado State University.

When he graduated in December 2018, he searched for job opportunities relating to his master’s degree. A position at Black Hawk College as a senior research analyst intrigued him.

The job is in the college’s Planning & Institutional Effectiveness (PIE) department and is focused on databases.

“Just seeing I would be able to work more with what my favorite part of my education was what propelled me to apply and cross my fingers,” he said.

Richardson was in luck – he got the job and started in February 2019. His duties include managing the data warehouse and training others how to use it.

Putting on a show 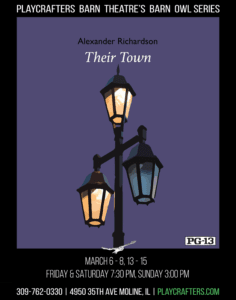 As he approaches his one-year anniversary as a BHC employee, he also nears a theater milestone.

Richardson’s play, “Their Town,” inspired by “Our Town,” will be performed at Playcrafters in March. He focused on sharing the classic play’s message in a modern setting.

“It was time to take that message of enjoying those little small moments in life and make it more relevant to what people today are familiar with,” he said.

Richardson loves helping productions come to life, seeing audiences’ reactions, and the teamwork that goes into making a performance possible.

“Everyone is there for the same reason,” he said. “They want to put on a good show.”