Grad: “It’s never too late to go back”

“I still have those moments where I take a step back and think, I work at a zoo,” she said with a smile.

Scarlet Behrens is the guest services manager at Niabi Zoo, which is a Rock Island County Forest Preserve position. On breaks, she likes leaving her office and viewing some of the hundreds of animals that call the Coal Valley zoo home.

“I’m thrilled I get to use my background to be here,” Behrens said.

Behrens originally started at Black Hawk College in 1999, the year she graduated from Riverdale High School. When she hit the pause button on college to pursue career opportunities, she knew she would be back to finish her degree.

“It was something I always wanted to do,” she said. “I had just put it on hold.”

She said an advisor who put her at ease, supportive instructors, and online classes all helped her succeed when she returned to college. She wants other nontraditional students to know they can do it, too.

“It’s never too late to go back,” Behrens said. She earned her Associate in Arts in 2008. 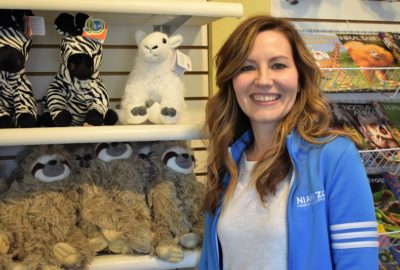 While initially studying at Black Hawk College, she became a sales associate at Contempo Casuals, which later became Wet Seal. She quickly realized she loved it and that she wanted to advance with the company.

“I wanted to see where that was going to take me,” she said.

Behrens received several promotions then took a break from college when she became store manager. After nine years at Wet Seal, she left to accept a job as assistant manager at Build-A-Bear Workshop.

While at that job, she was able to spend more time with family and return to college to complete her associate degree. When she decided to pursue new opportunities, she found the online job listing for the gift shop supervisor at Niabi Zoo.

“I had never even thought about retail at a zoo,” she said. She was intrigued so she applied, got the job offer and accepted it. She started working at Niabi Zoo in March 2010.

Her title and responsibilities have adjusted over time, with Behrens’ current duties as guest services manager including managing the gift shop, carousel and membership, as well as some IT, marketing, website and social media tasks.

When the zoo is closed for general admission, she focuses on ordering items and preparing for the next season. The gift shop also opens for some special events, like Breakfast with Santa Paws. The zookeepers are busy caring for the animals, making sure they are warm and active.

“The off-season is huge for us,” she said.

One big difference between her past retail jobs and this one is that Behrens is now the buyer for merchandise. She enjoys picking out new items with customers in mind and likes finding sustainable and conservation-based items.

While Behrens has found a great career fit at Niabi Zoo, her educational journey is not over yet. She has completed some online classes through Western Illinois University and plans to earn a bachelor’s degree in psychology, which was her favorite subject at Black Hawk College.