He had plans to study engineering at a four-year university after graduating from Moline High School, but it didn’t feel quite right.

After a lot of thought, he decided to switch directions and attend Black Hawk College instead, where he graduated with his Associate in Arts degree in 1999.

Rumler, who is now the president and CEO of the Quad Cities Chamber, doesn’t regret the decision. 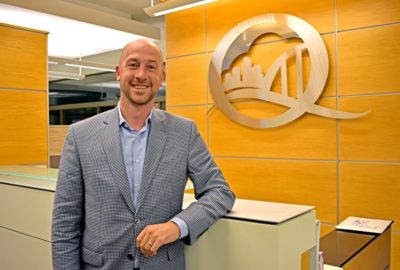 He didn’t know what he wanted to study, but Rumler realized he wanted to play college golf. He practiced hard and made the team.

“Sports might have been the entry point to get me to Black Hawk, but I knew that it was a great school and that I’d figure out my path,” he said.

His political science and economics classes inspired him, and his favorite instructors were Joan Eastland and Larry Lorensen.

His speech classes also stood out to him. Rumler said they helped him get comfortable talking to an audience, which he does regularly.

“The class sizes were small, comfortable, but the professors were challenging and would get to know you,” he said.

Golf and academics were both important to Rumler.

His name was enshrined on a banner in the gym after the National Junior College Athletic Association (NJCAA) recognized him as an Academic All-American.

Another golf highlight was the team placing seventh in the NJCAA Division II National Tournament in North Carolina in 1998.

“The last 20 years of my life have been really shaped by that desire to excel that was formed in me while at Black Hawk College, on the field and in school,” he said.

When deciding where to transfer, his goal was to play Division I golf. He found a perfect fit at Boston University.

Later, he transferred to Georgia State University in Atlanta, where he earned a bachelor’s degree in economics.

At both four-year institutions, his BHC classes transferred. Rumler said it meant a lot that he didn’t have to start over when he made transitions.

When he graduated from Georgia State, Rumler decided to move back to Boston.

“I always wanted to come back to the Quad-Cities, but the opportunities just weren’t lining up,” he said.

His journey included working for the Massachusetts State Senate, Congress in Washington, D.C., and returning to the Quad-Cities to run for the Illinois State Senate. He didn’t win, but the campaign trail led him to a valuable connection with the Illinois Quad City Chamber. 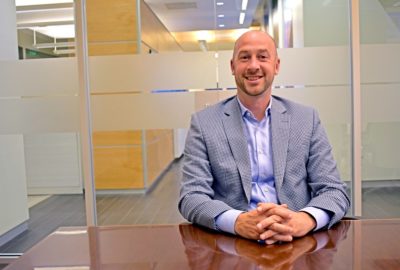 The Illinois Quad City Chamber recruited him for a new position: director of talent, attraction and retention and director of the Young Professionals Network. He accepted and eventually became executive vice president.

When the Illinois Quad City and Iowa Quad Cities chambers of commerce merged into the Quad Cities Chamber, he helped lead the merger. In addition to his executive vice president role, he became chief economic development officer in 2013.

Rumler made the decision to leave the Quad-Cities in 2016 for a job in Michigan as the chief strategy officer for the Grand Rapids Chamber. He said it was hard to leave but he knew the job would prepare him for the next step in his career. That experience helped him get the Quad Cities Chamber CEO position in 2018.

“I’ve taken some very calculated risks over the course of my life, and it started with the first risk of going to Black Hawk College,” Rumler said.

Each of those risks paid off – he gained the education he needed to succeed and met his goal of becoming CEO of the chamber before turning 40. He encourages prospective students to consider Black Hawk College, adding that a BHC education can help you get anywhere.

‘Impress’ Yourself – Get Involved ClubFest