Acres and acres of mostly cover crops, more than a hundred cows, a few dozen ewes, and about 700 chickens make up Grateful Graze in Cambridge, IL.

Grateful Graze never feeds the animals grain, and the farm is no-till.

“What we are doing is different, new and really cool I think,” Peterson said.

Peterson spends his days moving the animals so they are grazing in the right areas and looking after them, making sure they are healthy and that their needs are met.

This includes moving shade structures at least once a day, providing water, giving them access to minerals, and using essential oils on them to keep flies away.

An unexpected path led Peterson to college and this internship.

After graduating from Mercer County High School, he went straight into the workforce, working long hours at a factory.

One day after work, he crashed his truck into a tree. His severe injuries resulted in one of his legs being amputated and getting a prosthesis. Recovery was a year-long process.

As Peterson healed and gained strength, his brother Brad helped him get on a tractor. When he mastered driving it, his brother told Peterson he might be able to farm after all.

“That’s what I always wanted to do,” he said. The majority of his childhood memories are spending time on his grandpa’s farm.

Peterson felt inspired to attend Black Hawk College to pursue an agriculture education. Initially, he started in the Equine Science Program because of his love for horses.

A change in plans

A phone call during his freshman year set him on a new path, however. 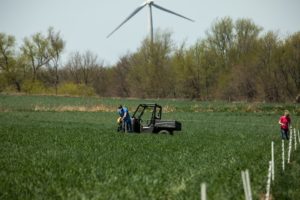 The owner of Grateful Graze, farmer Monte Bottens, called Peterson to offer him a part-time job watering the cows, and Peterson accepted.

“When I saw this it really piqued my interest,” Peterson said. “It’s something different and it’s improving the soil.”

Bottens said Peterson has a positive attitude and willingness to do things differently.

“We are a regenerative farm implementing cutting-edge practices of bringing livestock back to the land,” Bottens said. “We are doing things every day that have not been done before or not commonly practiced so it requires an attitude of perseverance and innovation to get things done.”

It didn’t take long until Peterson realized grass-fed livestock was the career path he was interested in, so he switched programs.

He is now earning Agribusiness Management and Agriculture Production Technology Associate in Applied Science degrees and will graduate in May 2020.

Peterson’s favorite things about Black Hawk College are the instructors and how hands-on classes are.

He can’t pick a favorite instructor because “they’re all great,” but so far his soil classes have been his favorite classes, and he also really enjoyed animal sciences.

“It’s a school that will teach you what you need to know,” he said.

After graduation, Peterson plans to continue his work at Grateful Graze. He loves what he does and feels at home caring for the cattle.

“I like to work for the land and for the animals,” he said. “I definitely see the need for this.”