This guest blog post is by 2019 BHC graduate Kristie Amato, of Moline, IL.

I did not choose a traditional educational path. I did not begin my college career until 2016, 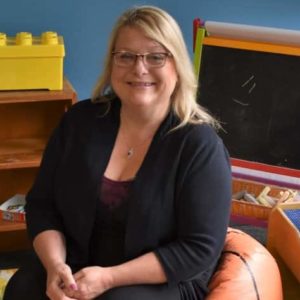 just before my 45th birthday. After high school, I married and had eight children. During that time I owned and operated a licensed family childcare business. For 25 years I raised my family and was self-employed.  Though I loved school, I never dreamed I would one day go to college. I always thought that was for other people: more successful people, younger people.

Over the years, child care began to evolve. It began to evolve from what was seen as “babysitting” to education. Suddenly the State of Illinois was demanding more, requiring more trainings and qualifications. The game had changed. As I went out and began receiving trainings, I felt it was time to take what I did to the next level. As the demand for better child care grew, as our community grew, the need for more available child care increased.

Taking a leap of faith

I made the brave decision to return to school. It was the most terrifying journey I had ever begun. I felt certain I would look like a fish out of water. I wasn’t sure how I would pay for college or if it was even financially possible. How would I fit this into my busy schedule? I decided I would simply go to get enough classes to gain my daycare center director credentials and get some business classes.

In the fall of 2016 I enrolled in four classes. The staff at Black Hawk College was beyond kind, supportive and helpful. The advisors met with me and helped lay out a plan for what I needed. I really had no idea what I was doing, it had been so many years since I had been to school! However, I soon learned that there was nothing to fear. My teachers were great. The online platform was easy to navigate. The numerous online classes and evening classes made it possible for me to go to college and not give up working and raising a family. And to top it all off, it was incredibly affordable! 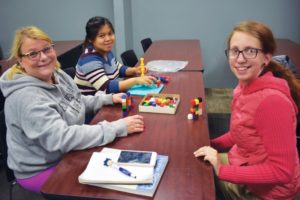 It wasn’t long before I realized that I had a passion for school and learning. Instructors like Jodi Becker, Ewelina Bergert, Denise Haga, and Peggy Schneider inspired me. The inspiration grew as a result of their dedication and patience. It was easy to see that these ladies truly believed in what they were doing. That teaching was not simply a job for them, but something they did out of passion. As a result, I began taking more classes.

I changed my major from a two-year degree to a transfer degree and joined several honor societies. I had so many experiences that I would not have had otherwise! Assignments took me to practicum sites, ballet classes, art museums and galleries, concerts, business dinners and more. I met with directors of daycare centers and interviewed them. I learned how to network within my community, joined the Quad Cities Chamber, the Optimist Club, and wrote letters to my state congressmen.

And then something else wonderful began to happen – other adult women from my field began to message me. They had noticed I was back in school. They began to wonder if maybe they could do the same. Even my sister returned to school! College is not just for young adults; it is for adults. The only boundaries we have are the ones we set for ourselves. Just because we are mothers, grandmothers, over 40, whatever, that does NOT mean we have to stop cultivating ourselves. 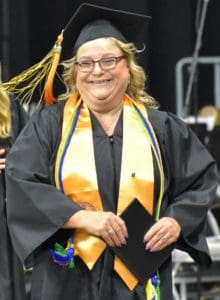 I graduated on May 16 with an Associate in Arts, an Early Childhood Education Associate in Applied Science, an Early Childhood Educator Certificate and an Assistant Teacher Certificate. It was the first time that I have ever walked to receive a degree. My adult children, my grandchildren, my younger children, sister, friends and husband were able to share that with me. None of this would be possible if I hadn’t taken that first step into Black Hawk College and met the staff mentioned above.

I started at Western Illinois University on June 3. This summer, I will proudly open my daycare center, The Heritage Academy and Learning Center LLC, which my husband and I own. I have fulfilled my director qualifications and credentials. Just three short years ago I would have never dreamed of this or had the courage to walk this path, so I truly do thank those I have met at Black Hawk College with all of my heart!