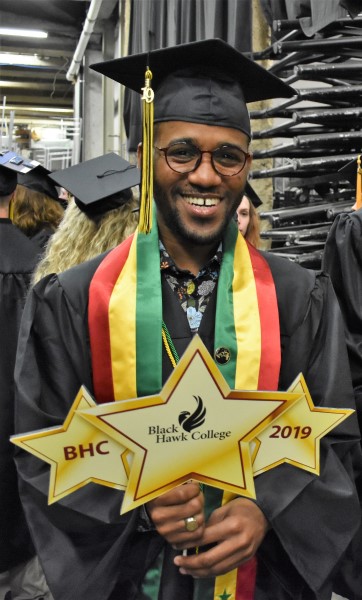 When Amadou Ndiaye crossed the stage on graduation night, he achieved a hard-won educational milestone.

His first steps to earn a college degree occurred thousands of miles away in Senegal, Africa, where attending school every day was not guaranteed.

Ndiaye understands the value of accessible education, and how important it is to take advantage of the opportunity if you are lucky enough to have it.

“That’s something not given to everybody,” he said.

A student shot and killed during a protest by a police officer at Ndiaye’s college was the catalyst for Ndiaye moving from Africa to the United States.

Ndiaye has family members in the Quad-Cities, and his uncle reached out urging him to come to Moline to study at Black Hawk College.

It took a year to get a visa, and he worked closely with BHC English as a Second Language (ESL) staff as he submitted needed paperwork.

Their helpfulness gave him a good impression of Black Hawk College immediately.

He moved to the United States in 2016, arriving in Moline just a week before his classes started.

The culture shock began on the drive home from the airport. 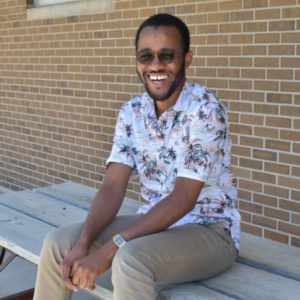 Ndiaye asked his uncle why no one was walking, and he explained that everyone was driving. Even as an elementary student, Ndiaye would walk miles to get to school.

Now, Ndiaye drives, too, and he regularly takes people from the Quad-Cities area to Chicago for appointments and interprets for them. Those he helps include people seeking asylum, becoming citizens, or assisting family in coming to the United States.

This volunteer work has made a big impact on Ndiaye. It is hard to hold back tears when he hears some of their stories, which make him grateful for the life he has.

Ndiaye speaks four languages: French and English, and African dialects Fulani and Wolof. French is often the common language when interpreting since there are so many African dialects.

One year of ESL prepared Ndiaye for college-level courses at Black Hawk College. Although he was initially nervous about his Associate in Arts classes, he did very well, earning almost all As and a few Bs. 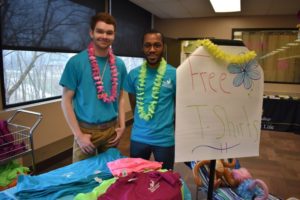 He especially enjoyed his history and political science classes.

Ndiaye got more involved with campus life by joining Student Government Association (SGA) for the 2018-2019 year. Before then, he generally went to class and then home.

BHC Director of Student Life and SGA advisor Jana Koch witnessed him transform from a quiet student to being very open and highly involved on campus, striving to welcome and help all students.

“While his journey at Black Hawk College has ended and we hated saying goodbye, it is a privilege to know that he will continue to seek a better life for not only himself but for all those he serves,” she said.

This fall Ndiaye will begin studying at Western Illinois University’s Quad-Cities Campus, where is majoring in Law Enforcement and Public Administration.

Ndiaye previously studied public law in Africa, and his career goal is to become an immigration lawyer.

He decided to transfer to Western because he wanted to stay in the area and likes the size of campus. At Black Hawk College, he really enjoyed small class sizes that let him connect with his instructors.

“Because of this institution, I have the foundation I need not only for English, but in everything I need to know for my major,” he said. “Don’t even think twice: you need to come to Black Hawk College.”