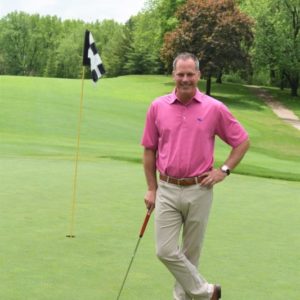 BHC alumnus Mike Downing has made a living on the green.

“My father was a PGA golf professional, so I grew up around the profession,” he said. “I knew that is what I wanted to do at an early age.”

Downing lived in the Quad-Cities until age 9, when his family moved to Kewanee. He graduated from Wethersfield High School.

He made the decision to go to Black Hawk College because he didn’t want to immediately attend a big university and he wanted to play golf.

That made Black Hawk College the perfect fit.

The BHC golf team has a history of winning Region IV and Arrowhead Conference titles. Downing and his teammates claimed both titles during his years at Black Hawk College.

He enjoyed the low instructor-to-student ratio that allowed for individual attention in the classroom.

Times spent with friends and traveling for golf are some of his favorite BHC memories.

When in North Carolina for nationals his freshman and sophomore years, he fell in love with the area, not knowing that in the future he would call the state home.

“Playing golf at Black Hawk has opened many doors for me personally and now professionally,” he said.

Downing earned an Associate in Arts in 1995. He then transferred to Western Illinois University to continue his education and play golf on an athletic scholarship.

A career in golf

Just a few years after Black Hawk College, Downing moved to North Carolina when his father bought a golf resort with friends. 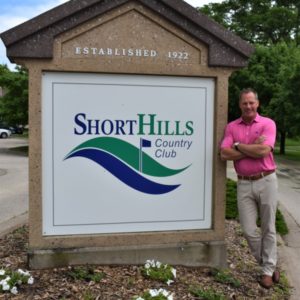 “From there, I was able to be at the right place at the right time and was offered a position at Linville Ridge in the mountains of North Carolina,” he said.

He worked six months of the year there. During the other six months he worked at The Old Collier Golf Club in Naples, Florida. He then became head golf professional at Linville Ridge in 2002.

A decade later, he accepted the position of director of golf at Statesville Country Club in North Carolina. A few years after that, he moved back to the Quad-Cities when the Short Hills position opened.

“Short Hills is where I first learned to play golf when I was six years old with my grandparents, and to now be the head golf professional is pretty cool!” Downing said.

The position involves giving lessons, conducting events, managing staff and inventory, merchandising, and making sure every player has a great experience.

Some BHC golf practices are held at Short Hills Country Club, and the club is the location for Black Hawk College Foundation & BHC Athletics Golf Outing, which is June 10.

What Downing loves most about work is the relationships he has built during his more than 20 years in the golf business.

“I love going to work every day, I enjoy being around people, it’s fun,” he said.

He advises golfers to keep fun in mind – always enjoy the game and remember it is a game: “games are supposed to be fun.”