Ezequiel Bustamante is more than 2,500 miles from his hometown, but he has found a second home at Black Hawk College.

“I feel like the United States, Black Hawk College and Texas are part of me,” he said. “I feel proudly to be here.”

Bustamante has ridden horses all his life, but he did not have any formal equine education opportunities in Venezuela.

To see if he truly wanted to work with horses, he did a 3-month internship at a ranch in Texas in 2015. The internship was a success: he loved it.

The economy, politics and security are unstable in Venezuela, which also played a role in Bustamante wanting to study in the United States.

“I was feeling without liberty or freedom,” he said.

Bustamante kept asking himself what he would do if he lost everything. To better his situation, he decided to focus on getting an education because knowledge can’t be taken away.

He knows people can restart with nothing, but having “something to back up your resume is a lot better.” That is how his higher education journey began.

When he searched for great equine science programs in the United States, East Campus quickly became a contender.

He made plans to leave Venezuela to visit East Campus to see if it was the right fit. Once he stepped on campus, he almost instantly knew it was.

The facilities and the instructors impressed him, and he knew it was the right college to attend.

“This was the place to come,” he said. “They treat me like a family.”

Bustamante made the move from Acarigua, Venezuela to Illinois to attend Black Hawk College in 2016.

Leaving loved ones behind was hard, but his family was very supportive – they wanted him to get a college education.

Although his parents still live in Venezuela, they bought a ranch in Texas after Bustamante decided to go to college in the United States. 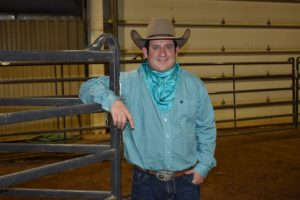 Bustamante was at the Quad-Cities Campus for the English as a Second Language (ESL) program for a semester before attending East Campus.

Spanish is his first language, and he needed to work on his English skills in order to be ready for college-level courses in the U.S. He said the ESL program was an excellent experience and a big help.

Bustamante graduated with associate in applied science degrees in Equestrian Science and Horse Science Technology in 2018. He decided to attend East Campus for another year to earn a beef production certificate and take some general education classes.

This year he will transfer to a four-year school to earn his bachelor’s degree. He is leaning towards Oklahoma State University, where he would major in animal science ranch operations or pre-vet.

Once he is done earning his education, he plans to work on his family’s ranch in Texas. While he won’t be in the Midwest anymore, he isn’t completely leaving Black Hawk College behind.

Black Hawk College is now a part of him.