Veteran, BHC student receives SUV to get to campus 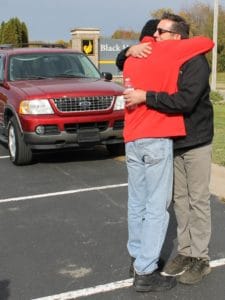 Former Marine Jason Roberts is traveling down a new road — at age 42, he’s a full-time college student pursuing an associate in arts degree.

But a few weeks into his first semester, he needed assistance getting to campus.

On Oct. 25, Whan came to the Quad-Cities Campus and handed Roberts the keys to a 2005 Ford Explorer.

“I’m just floored,” Roberts said. “This is like so many birthdays put together.”

A variety of circumstances caused Roberts to be without a car for the last two years. Earlier this year he moved to the Quad Cities. He’s living with his mother for the first time since high school and is determined to keep his life moving forward.

The day after getting the SUV, Roberts drove himself to a job interview. He got the job.