It all started with a retaining wall. When working as a handyman, Shaun Brown helped a Black Hawk College GED instructor rebuild one.

A conversation during the work inspired him to fast track his education. Within

months, Brown earned his GED and was enrolled at Black Hawk College as a college student.

Now, Brown is celebrating the third year of the company he started, Bit Tech Computer Solutions in Rock Island.

Business is going well, and Brown says he owes a lot to the college.

“Black Hawk changed my life for the better, and they will do the same thing for you if you apply yourself and stick with it,” he says.

Networking professor Don Mosier gives credit to Brown, saying the work ethic, drive and determination Brown displayed “guaranteed he would be successful after he left us.”

Bit Tech offers a variety of IT services and sells refurbished and used devices.

Initially Brown had not planned on opening his own business so quickly, but he has always been an entrepreneur and decided to create his own job when the right fit wasn’t available.

As a kid he ran a worm stand, selling them by the dozen for a dollar less than the bait shop, then mowed lawns and later assisted with janitor work at a family business.

Starting Bit Tech was very challenging, and the first two years were tough. Brown said Bit Tech has finally reached the light at the end of the tunnel, and he encourages people to not give up. 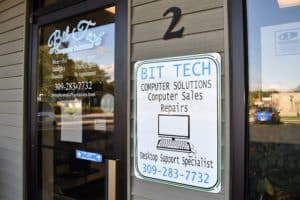 Not giving up is a common theme for Brown.

Although he did not think college was possible financially, he took his instructor’s advice and met with Jen Holldorf, BHC’s Special Populations Coordinator. After learning about available grants, Brown realized college was within his reach.

Holldorf remembers that first talk with Brown, and  the moment where he recognized he could go to college and succeed.

“He had a lot of determination,” she says. “I could see the motivation and the drive to be successful. He knew he could do it and he wanted to do it.”

Over the years he had helped friends and family members with computer fixes, and Holldorf rekindled his passion for repairing computers when she asked him what he might want to study.

Brown shared his interest in computers and she told him about Black Hawk College’s IT programs. Brown knew IT was the best choice for him.

Mosier says the college’s Computer Information Technology program is a great place to start or enhance an IT career, and “Shaun took our strong foundation and ran with it!”

Brown’s opportunities at Black Hawk College prepared him for his business. Hands-on labs and working in the IT department as a student tech gave him the experience he needed.

“The hands-on classes and internship requirement were the best prep,” Brown says, adding everything he learned is used almost daily in his shop.

BHC faculty members have significant industry experience that impacts every aspect of programming. They also have strong contacts with local IT professionals.

“As almost lifelong IT professionals ourselves, we all love what we do, and I think that comes through,” Mosier says.

The critical importance of people skills in the IT field is emphasized throughout the program.

“Shaun is a natural in this area, but other students learn that these 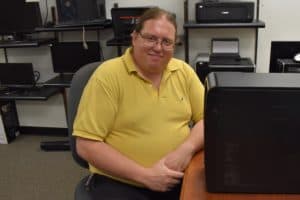 soft skills are every bit as important as technical ones,” he says.

Working with people is one of Brown’s favorite aspects of his job because he has always loved helping people.

His goal now is to continue to grow, but only to a certain extent: large enough to support his family, but small enough to always be able to make the time to say hello and check in with each client.

Eventually, he would love to have enough staff to handle some day-to-day work so he could possibly return to Black Hawk College as an adjunct instructor.