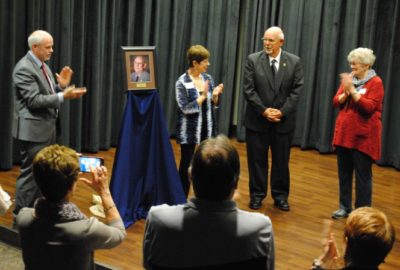 Professor emeritus Ken Maguire was inducted April 22, 2016, into the Black Hawk College East Foundation Wall of Fame in a ceremony at the college’s East Campus south of Kewanee.

The Wall of Fame represents individuals and organizations that have made Black Hawk College East Campus the quality higher education institution it is today.

As one of six original East Campus faculty members hired in 1967, Maguire devoted 36 years as a professor of liberal arts and science, teaching U.S. government, sociology, anthropology and other history courses to thousands of students.

Students and faculty peers describe him as one of the best lecturers at the college. Maguire also served as chair of the Liberal Arts and Science Department for 13 years, interim dean of instruction, and chaired two North Central Association Accreditation studies.

He was a major influence on the athletic programs at the East Campus as co-coach of the first women’s basketball team and founder of the Black Hawk East Booster Club in 1973. He also was co-founder and first president of the Arrowhead Athletic Conference.

To honor Maguire for his outstanding career and contributions to higher education, the foundation established the Ken Maguire Liberal Arts & Sciences Scholarship. It will provide financial assistance to East Campus liberal arts and science transfer students for many years to come.

More than $22,000 has been raised for the scholarship in cash and pledges, including a generous donation from Ken and Cathy Maguire.